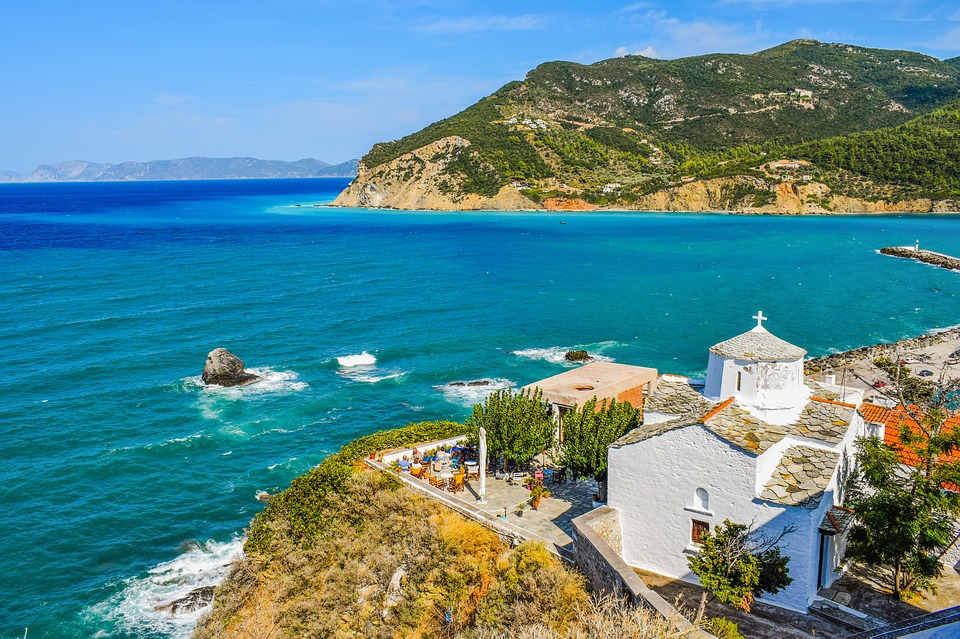 Mamma Mia is one of those movies that has you fantasizing about Greece for years after watching it. In order to make your next Greece vacation a no brainer, I put together a list of all of the amazing Mamma Mia film locations that you can visit while you’re there.

I have always wanted to visit the adorable Church Sophia gets married in (or doesn’t end up getting married in)… or lay in the sand on the beach where Sophie and Sky sang their romantic song together “Lay All Your Love On Me”.

1. The Little Church At The Top Of The Hill

This church and rocky cliff is on the adorable island of Skopelos on the eastern coast. Agios Ioannis is the name of the church, and the view from the top of the cliff is supposed to be breathtaking. In the film, they glammed it up with string lights along the walkway. The church has sweeping ocean views and is now, of course, a popular wedding destination.

Remember where Sophie and Sky sing “Lay All Your Love On Me”? Haven’t you always wanted to jump into the scene and ride jet skis into the sunset? I think we all have. That little beach where that scene takes place is called Kastani Beach on the western end of Skopelos Island.

This is also the beach where the scene during the “Does Your Mother Know” song was filmed. (Aka, the best scene of the movie.)

A stunning beach called Glysteri Beach is where Hotel Villa Donna was located around. The cute bars in the movie that were along the beach were taken with the cast and crew, but the fantastic scenery and ocean are there waiting for you! This is also the location where Sophia is reading her mother’s diary to all her friends, running around singing “Honey, Honey”.

To make it even more tempting to visit, it’s ALSO the beach where Sophia, Sam, Bill and Harry leap from the rocks into the sea during the “Our Last Summer” song and scene. Apparently the rocks around the beach are not easy to access, but that never stopped a true Mamma Mia fan.

Remember when the whole crew jumps in the sea after singing Dancing Queen? How could you not. The scenic fishing village of Damouchari at Damouchari Bay is where this scene was filmed. Several of the cast also stayed at Hotel Damouchari and many of the locals played as extras in the movie.

This is also the place where Donna meets Tanya and Rosie, her Dynamo besties when they arrive. This one is a MUST visit when it comes to Mamma Mia film locations.

Okay so Hotel Villa Donna is not a real place. However, you can stay at the hotel on the island where several of the Mamma Mia cast stayed. Check out The Hotel Skopelos Village, where you can even see Meryl Streep’s notes in the guest book. The entire island of Skopelos has that “Hotel Villa Donna” look to it.

Another great stay is at Pyrgos Castle where the cast would also hang out during their stay in Greece. I know these hotels are technically not Mamma Mia film locations you can visit, but it’s close enough to add to the list!

6. The Port Where They Arrive

Sam Bill and Harry? Remember when Sam and Harry miss the ferry to take them to the island… and then Bill spontaneously is there with his boat and offers to give them a ride? If you’ve always wanted to arrive at that port and await your ferry to the mystery island, now is your chance. It was filmed at the Old Port of Skiathos Island.

7. Croatia Is The Main Film Location For The Second Movie!

You heard that right, Mamma Mia the sequel Here We Go Again, was filmed in Croatia on the island of Vis.

Most of the entire island appears in the movie, however you will notably see Stiniva beach and the scene where young Donna and Sam stroll romantically down the ocean. That scene was located specifically in Srebrena Bay. The rocks in real life appear to glisten, that is how the beach got its name which actually means “silver”.

Now that you’ve learned all about the Mamma Mia incredible film locations the film can take you through, let’s recap those 7 spots so you can easily mark them for your Mamma Mia trip:

If you check out any of these incredible Mamma Mia film locations or have any more to add, please let me know in the comments! (I left out the location in Croatia on the Greece map, but just remember to add in the island of Vis!) I adore Mamma Mia and can’t wait to do this trip myself. Life is short, the world is wide… xo!